Toomas Hendrik Ilves is a keynote speaker who served as President of Estonia from 2006-16. As President, he drove key initiatives in e-government and cyber security for which the country has been acknowledged as a world-leader.

He is known internationally for his work in digitising Estonia’s government.  During his presidency, he was appointed to serve in several senior ICT positions in the European Union.  He served as Chairman of the EU Task Force on eHealth (2011-12), Chairman of the European Cloud Partnership Steering Board on invitation by the European Commission (2012-14), and chaired the High-Level Panel on Global Internet Cooperation and Governance Mechanisms convened by ICANN (2013).   He co-chaired the World Bank advisory panel for the World Development Report 2016 “Digital Dividends”, (2014-15) and chaired the World Economic Forum’s Global Agenda Council on Cyber Security.

In 2018 he was elected by aPolitical as one of the World’s 100 most influential people in Digital Government, and in 2017 was awarded the Reinhard Mohn Prize entitled, “Smart Country: Connected. Intelligent. Digital.” in recognition of his work on pushing for the adoption and acquisition of digital skills, a decade before the smartphone.

Prior to becoming President, Toomas Ilves was vice-president of the Foreign Affairs Committee of the European Parliament (2004-06), a Member of the Estonian Parliament (2002-04), and foreign minister of Estonia (1996-2002), where he led Estonia’s EU and NATO accession process.    He was Estonia’s first Ambassador post-independence to the USA and Canada (1993-96) and prior to this worked at RFE-RL as director of the Estonian service, and as a research analyst.

Toomas Ilves is Founder and a Patron of the International Centre for Defence and Security (2006-16).  He is Co-Chair of The Global Futures Council on Blockchain Technology, a World Economic Forum working group for using blockchain technology to improve internet security.  He is Commissioner of the WHO Pan-European Commission on Health and Sustainable Development: Rethinking Policy Priorities in the light of Pandemics; and a member of the Munich Security Conference Advisory Council.  He is an advisory council member of the German Marshall Fund’s Alliance for Securing Democracy, an advisory board member of NATO CCDCOE, and joined World Bank Identification for Development (ID4D) High-Level Advisory Council.

Toomas Ilves is a Distinguished Fellow of the Center for European Policy Analysis, and a Visiting Professor of Democracy in the Digital Age at the Johan Skytte Institute of Political Studies, University of Tartu.   Previously he was a Berggruen Fellow at the Center for Advanced Study in the Behavioral Sciences, a Distinguished Visiting Fellow at the Hoover Institution, and the Global Digital Policy Incubator, Stanford University.

During recent years, President Ilves has spoken and written extensively on integration, transatlantic relations, e-government, cyber security and other related topics.  He has published several essays, articles and books in Estonian, Finnish, Latvian Hungarian and Russian.  He is currently writing a book on democracy in the digital era. 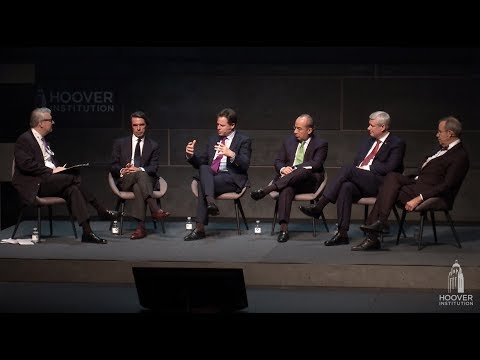 Future of the internet

Why liberal democracy matters
The Economist