He has published more than a dozen books, including “The Myth of the Ethical Consumer” and has written over 100 articles for leading journals across the world.

His research has been supported by various funding councils including, Australia Research Council, where he has been awarded over $14,000,000 in funding. His research, teaching and public service has been recognised in a number of ways, with numerous best paper and teaching awards. He is a frequent commentator on public events and social issues in the press and various media. 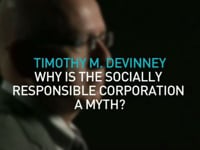 TIMOTHY M DEVINNEY | WHY IS THE SOCIALLY RESPONSIBLE CORPORATION A MYTH?

TIMOTHY M DEVINNEY | WHY IS THE SOCIALLY RESPONSIBLE CORPORATION A MYTH?