Stephen D. King is a British economist and author. He is a senior economic advisor to HSBC and was formerly their Global Chief Economist.

Before becoming a corporate economic advisor, Stephen D. King was involved in government finance and economics: He was a member of the UK government Asia Task Force from 2010 to 2014 and has presented both oral and written evidence of globalisation and international monetary policy to the House of Commons Treasury Committee and the House of Lord Economic Affairs Committee.

Stephen is also a best-selling author. His first book ‘Losing control’ (published in 2010) is a study of emerging markets and the impact they were likely to have on the global economy. His second book ‘When the money runs out’ published in 2013 was selected by the Financial Times, The Economist and The Times as book of the year in 2013.

In 2014, Stephen D. King became part of the Financial Times team as he joined ‘Exchange’ a platform that provides agenda-setting commentary from leading policy-makers, academics, and writers from around the world.

His latest book, released in May 2013 and entitled Grave New World: The End of Globalization, the Return of History has been nominated for the Financial Times and Mckinsey Business Book of the Year 2017.

The End of Globalisation, the Return of History

Grave New World: The End of Globalization, the Return of History

A controversial look at the end of globalization and what it means for prosperity, peace, and the global economic order

Globalization, long considered the best route to economic prosperity, is not inevitable. An approach built on the principles of free trade and, since the 1980s, open capital markets, is beginning to fracture. With disappointing growth rates across the Western world, nations are no longer willing to sacrifice national interests for global growth; nor are their leaders able—or willing—to sell the idea of pursuing a global agenda of prosperity to their citizens.

Combining historical analysis with current affairs, economist Stephen D. King provides a provocative and engaging account of why globalization is being rejected, what a world ruled by rival states with conflicting aims might look like, and how the pursuit of nationalist agendas could result in a race to the bottom. King argues that a rejection of globalization and a return to “autarky” will risk economic and political conflict, and he uses lessons from history to gauge how best to avoid the worst possible outcomes. 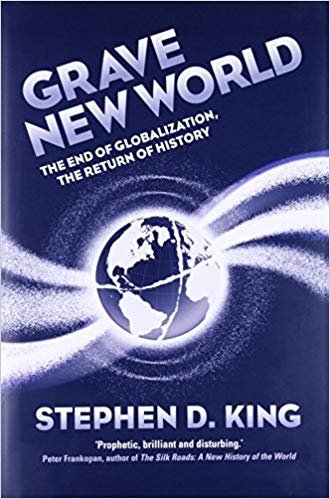