Sebastian is the Paul A. Volcker Senior Fellow for International Economics at the Council on Foreign Relations (CFR), and from 2007-14 was Director of the Center for Geoeconomic Studies at the same establishment. He has led a US delegation to Beijing to discuss the internationalisation of the Chinese currency, and has been instrumental in CFR’s work on subjects at the intersection of international relations and international finance.

Currently serving on the London School of Economics Commission on the Future of British Diplomacy, Sebastian is also a contributing editor for the Financial Times and has served previously as a columnist and editorial board member at the Washington Post. In addition to his monthly column for the Financial Times, his recent writing has been published in the New York Times, the Wall Street Journal, and the Atlantic Monthly.

Before joining the Post in 1999, Sebastian spent thirteen years with the Economist, where he wrote about foreign policy and international finance. Between 1997 and 1999, Sebastian was the Economist’s Washington bureau chief and wrote the magazine’s weekly Lexington column on American politics and foreign policy. He is a two-time Pulitzer prize finalist: once for editorials on Darfur and once for a series on economic inequality.

His book, “More Money Than God: Hedge Funds and the Making of a New Elite” (Penguin, 2010), was the recipient of the Loeb Prize, a finalist in the Financial Times/Goldman Sachs prize, and a New York Times best-seller. His previous books are “The World’s Banker” (Penguin, 2004) and “After Apartheid” (Crown, 1992).

Sebastian’s most recent book is The Man Who Knew: The Life And Times Of Alan Greenspan (Bloomsbury 2016). A new biography based on five years of research and unmatched access to Greenspan, the book presents a nuanced assessment of one of the most influential economic statesmen of the twentieth century and issues a warning about the future of finance. The story of Greenspan, according to Mallaby, is the story of the making of modern finance, for good and for ill. The book has been shortlisted for the Financial Times and McKinsey Business Book Of The Year Award.

The cult of the expert – and how it collapsed 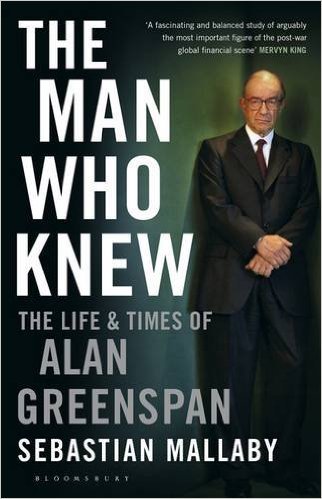 The Man Who Knew: The Life and Times of Alan Greenspan by Sebastian Mallaby

Interested in booking Sebastian Mallaby to speak at an event? Please provide your details and we’ll get in touch within 24 hours.