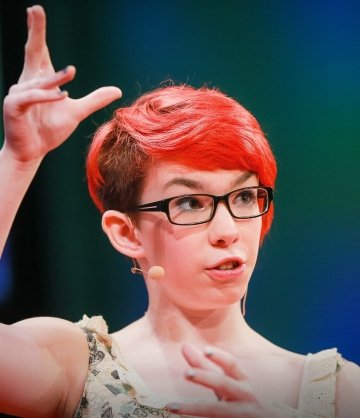 When she was nine years old, doctors confirmed Rosie King’s self-diagnosis of Asperger’s Syndrome. With two younger siblings severely affected by autism, Rosie had a burning desire to help make the world a more tolerant place for people with autism ever since she was a young girl. She found the opportunity to do so when her family was invited to do a local news segment on her mother’s children’s books, which featured Rosie’s illustrations. Her lack of inhibition made her a natural presenter, and she was asked to host BBC Newsround’s special program “My Autism and Me,” bringing her a much wider audience and an Emmy Kid’s Award. Rosie continues to raise awareness about autism, and is working towards her goal of becoming a professional actress and storyteller.

King is a Young Ambassador for the National Autistic Society, and a champion individuality. Her inspiration to make a difference comes from the fact that her younger brother and sister are both severely affected by autism.

King was asked to speak for TEDMED at the JFK Center in Washington DC last year, and received a standing ovation as well as a week long stint on TED.COM, where her talk has now been viewed well over a million times.

Rosie King loves to write, and typically has several pieces of fiction in the works at any given time. She is planning to write a book about life with her family within the next year

TED | How Autsim Freed Me To Be Myself