Dr Robert Livingston is a Harvard social psychologist and one of the foremost authorities on the science behind prejudice and racism in organisations. He has served as a diversity consultant for Fortune 500 corporations, public-sector organisations, and non-profit groups for over two decades which makes him an esteemed speaker and expert in his profession.

Before he joined the Harvard Kennedy School in 2015, he was a professor at Sussex University, Kellogg School of Management at Northwestern University as well as the University of Wisconsin-Madison. He served as chair and professor of “Organisational Behaviour” and was also the faculty director and founder of the Centre for Leadership, Ethics and Diversity (LEAD).

Dr Livingston’s work on race, implicit prejudice, leadership, and social justice has appeared in prestigious academic journals such as Psychological Science, Academy of Management Journal, the Journal of Personality and Social Psychology, and Leadership Quarterly. His work has been covered by popular news organisations such as USA Today, The New York Times, Wall Street Journal, and the Harvard Business Review. His Harvard Business Review article called “How to Promote Racial Equity in the Workplace” won the Warren Bennis Prize for Leadership in 2020, which is given to the best leadership article published in Harvard Business Review each year.

His revolutionary and powerful strategy to combat racism is discussed in his book, “The Conversation: How Seeking and Speaking the Truth about Racism Can Radically Transform Individuals and Organizations”. It was selected as one of 15 books shortlisted for the Financial Times & McKinsey Best Book of 2021 Award.

Listening to jazz, enjoying whiskey and wine tasting, investing in real estate, hiking, watching nature documentaries, philosophy and gastronomy are what he takes pleasure in doing during his leisure time. Throughout his life, he has lived in five countries and can speak four different languages.

The Conversation with Dr Robert Livingston 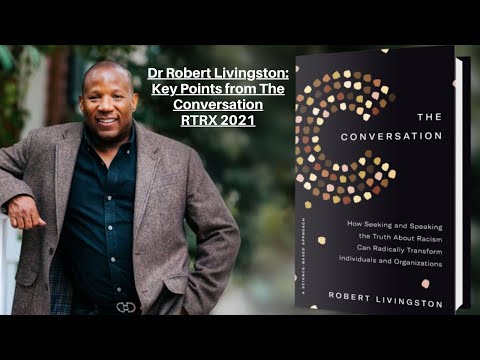 The Conversation: How Talking Honestly About Racism Can Transform Individuals and Organizations