Having served in posts across the world as an intelligence officer, he was Head of MI6 during the September 11th attacks and the invasions of Iraq and Afghanistan. Codenamed “C”, he is only the second holder of that position to be named publicly.

For the preceding five years Sir Richard was Director of Operations and, from 1998, Assistant Chief. As Director of Finance, Administration and Personnel he also oversaw the move of Secret Intelligence Service into its now-iconic Headquarter Building at Vauxhall Cross in 1994.

Sir Richard Dearlove is currently a senior advisor to the Monitor Group – a global consultancy and private equity firm – and in April 2013, it was announced that Sir Richard joined the advisory board of Ergo, a global intelligence and advisory firm. Since 2006, Sir Richard has also been serving as Chairman of the insurance company Ascot Underwriting Ltd.

Book Richard Dearlove as keynote speaker at your next event or conference. 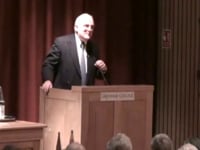 Our Changing Perceptions of National Security (2009)