Reverend Richard Coles is a Church of England priest, broadcaster and former musician. He is often described as Britain’s most famous Vicar. Prior to this, he was also the instrumentalist half of pop band, The Communards, with Jimmy Somerville.

The Communards achieved three Top Ten hits, including the Number 1 record of 1986, a dance version of “Don’t Leave Me This Way”. After his music career came to a halt in 1988, Richard began writing for the Times Literary Supplement and Catholic Herald. He studied BA Theology at King’s College London between 1990 – 1994.

In addition to frequently hosting corporate award ceremonies plus delivering keynote and after dinner speeches, Richard has had over 3 decades of broadcasting and presenting experience with the BBC. He is the co-presenter of BBC Radio 4’s Saturday Live, a regular guest on shows such as Would I Lie To You?, Have I Got News For You and QI. He was the inspiration for the protagonist in the BBC hit comedy ‘Rev’, a programme for which he also served as a consultant. He was on Celebrity Masterchef in the summer of 2016 and in 2017, he co-hosted the BBC’s The Big Painting Challenge, alongside Mariella Frostrup. In August 2017, he was the fifth celebrity announced for Strictly Come Dancing, partnered with Dianne Buswell. Richard has taken part in Celebrity Mastermind twice, winning on both occasions. Towards the end of 2019, he appeared as team captain on BBC2’s University Challenge, representing Leeds University.

His keynote speech themes are primarily Trust, Ethics, Diversity & Inclusion, LGBT and Mental Health. As the only Vicar with a number one hit record, this also makes Richard a popular after-dinner speaker, sharing his humorous tales of journey from popstar to priest.

From 2011, Richard has been on the board of Wellingborough Homes, a social enterprise that provides housing and community support for the Borough of Wellingborough. In 2012, he was awarded an honorary doctorate by the University of Northampton and has become a Fellow in the Royal Society of Arts. In 2017, he was elected a Fellow of King’s College London and Chancellor of the University of Northampton. In 2019, he was appointed Honorary Chaplain to the Worshipful Company of Leathersellers. 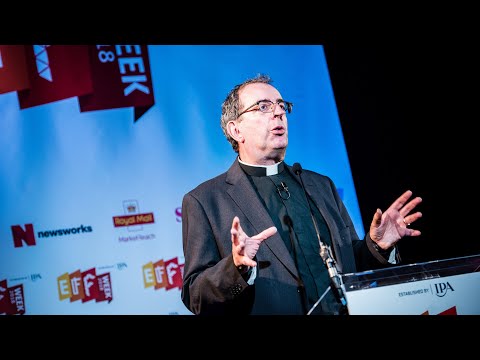 What an event, what a speaker. We knew how fabulous it was having attended but the amount of emails of joy and gratitude we have received is overwhelming. Thank you, thank you
Berwin Leighton Paisner