Mike Atherton is a broadcaster, journalist and a former England international first-class cricketer. A right-handed opening batsman for Lancashire and England, and occasional leg-break bowler, he achieved the captaincy of England at the age of 25 and led the side in a record 54 Test matches. Known for his stubborn resistance during an era of hostile fast bowling, Atherton was described in 2001 as a determined defensive opener who made “batting look like trench warfare”.  He had several famed bouts with bowlers including South Africa’s Allan Donald and Australia’s Glenn McGrath. Atherton often played the anchor role at a time when England batting performances lacked consistency and the side’s overseas results were mediocre.

Since his retirement from the game, Mike Atherton has carved out a successful career in the media. He was a journalist for The Sunday Telegraph and succeeded Christopher Martin-Jenkins as The Times cricket correspondent on 1 May 2008.

Between 2002 and 2005, Mike Atherton was a member of the Channel 4 commentary team for the coverage of Test cricket in England. During this period he also worked as a commentator for BBC Radio and Talksport on Test matches outside England. Atherton joined the Sky Sports commentary team in 2005, after they won the rights to live Test cricket in England, joining long-time England teammate Nasser Hussain, their former England coach David “Bumble” Lloyd and former England captain David Gower. He commentates on all forms of the game, home and abroad, as well as covering some domestic matches. He often performs as the post-match master of ceremonies for internationals in England, presenting awards and interviewing players.

In 2002 he produced his autobiography: Opening Up. He has also written Gambling: A Story of Triumph and Disaster, published in 2006.

In March 2010 he won Sports Journalist of the Year, at the British Press Awards. The judges announced this was “a unanimous choice”, praised the former England cricket captain for “tackling subjects way beyond cricket” and said “the brilliance of his writing shines.”

He was one of the commentators in 2011 Cricket World Cup. He has gained fame for his no nonsense but dryly humorous views on cricket. 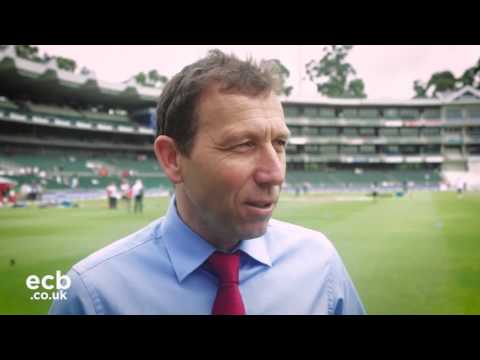