Michael Shnayerson is a long-time Vanity Fair staff writer and the author of eight non-fiction books on a wide range of subjects. Some of his books are on environmental topics – “Coal River,” for example, about the dreadful practice of mountaintop coal removal — while others are biographies of public figures: singer and civil rights activist Harry Belafonte, for one, New York governor Andrew Cuomo for another. All are the works of a compelling storyteller, but his latest marks a new direction and has brought him a new, enthusiastic audience. Its title: “BOOM: Mad Money, Mega Dealers, and the Rise of Contemporary Art” (Public Affairs)
Contemporary art is a sprawling subject – too big for any book – so Shnayerson narrowed his focus, chiefly to the dealers who’ve pumped up this market from the post-war days of Abstract Expressionism (with artists like Jackson Pollock and Willem de Kooning) to the art of today, art defined less by any title than by its price tag and whether it sells, hopefully for more next year; the age of art as an asset class.
Shnayerson has been called a “demystifier,’ and that is, indeed, what he’s sought to do with the contemporary art market: to tell the story of how this complex market came to be, in fun, fast prose that reads not like an academic tome but a fun, fast, book-length Vanity Fair piece.

Michael Shnayerson and Arne Glimcher on the Business of Contemporary Art

Boom: The Megadealers Behind the Irresistible Rise of the Contemporary Art Market

“BOOM” is in a sense a social history, chock full of fascinating characters, rife with anecdotes on every page. Among BOOM’s early dealers are Sidney Janis, who made a fortune in the garment district inventing the two-pocket Oxford shirt and spent the rest of his life collecting and selling contemporary art…and Betty Parsons, who singlehandedly represented nearly all the early giants of Ab Ex…on up through Leo Castelli, the European-born prince of Pop whose artists became the world’s most famous (Jasper Johns, Robert Rauschenberg, Andy Warhol, Roy Lichtenstein and more), and Pace’s Arne Glimcher, who j50 years later has just built the largest new art gallery in the world.  These led to the rollicking 80s market, with a whole new host of dealers, Mary Boone and Larry Gagosian among them.

Today a new generation of dealers has taken the torch, and the artists they’ve promoted are a fascinating bunch (Damien Hirst, Richard Prince, Peter Doig, Mark Bradford, Yayoi Kusama and the irrepressible Jeff Koons). Their market is global, which means ever more money propels it. And yet the global market comes with troubling issues  – for starters, the harsh reality that four “mega dealers” control much of the market (Gagosian, David Zwirner, Hauser & Wirth, and Arne Glimcher’s Pace) leaving smaller dealers to struggle for their very survival.
Upon its publication last May on the eve of Art Basel Miami, “BOOM” immediately found an ardent audience, both of art market insiders and those outside that market curious to know how it works and who its principal characters are. Already, “BOOM” is in its 4th printing, festooned with favorable reviews and selling briskly in the markets that care most about contemporary art: Manhattan, the Hamptons, Los Angeles and London. 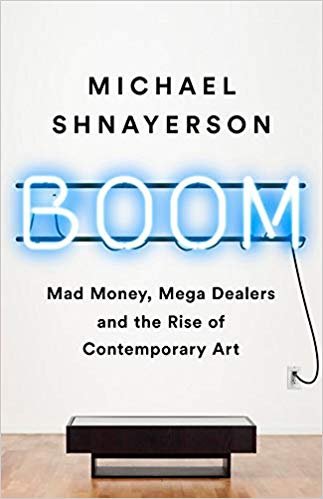