Michael (Lord) Dobbs is a keynote speaker who has is a British Conservative politician and best-selling author, most notably for his House of Cards trilogy.

Michael Dobbs has enjoyed a ringside seat on many historic occasions. He was with Margaret Thatcher when she took her first steps into Downing Street as Prime Minister, and he was there again with John Major when he was kicked out. In between he got bombed in Brighton, banished from Chequers (after a row with Maggie), and helped win a few elections.

Yet it’s as an author that he has gained most plaudits. It’s been thirty years since House of Cards was made into an award-winning BBC TV Series. It recently resurfaced as a sensation around the globe with a new series on Netflix, winning Michael five Emmy nominations. After creating the iconic figure of Francis Urquhart he has gone on to write a series of novels about Winston Churchill that had the critics falling over themselves in praise. Now he’s created the most dangerous character of his career, Harry Jones. As the Financial Times said, “think Die Hard with a stiff upper lip.”

Michael has also been Deputy Chairman of Saatchi & Saatchi, a TV current affairs presenter, a newspaper columnist, a renowned expert of Winston Churchill – the subject of four of his award-winning novels -, a Visiting Professor at Oxford and Tufts Universities and a widely acclaimed speaker.

He has undertaken many speaking tours, his most recent being described as ‘a coast-to-coast triumph’. He also shared a girlfriend with Bill Clinton when they were both students at Oxford. ‘For some reason she never introduced us,’ he says. ‘It took me many years and an entire presidential scandal to discover why.’

He is a highly skilled raconteur and is much in demand for corporate and literary events. He has also helped raise tens of thousands of pounds for charities in recent years. 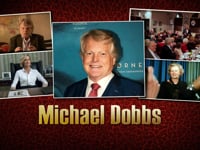