Dr. Michael Bloomfield is a creativity and innovation expert and anthropologist. He is a leading authority on creativity thinking – which is not being recognised as one of the most crucial skills in the professional world, as well as in the booming area of personal growth and wellbeing.

Michael’s work has been published in the Guardian newspaper, and he has run Guardian Masterclasses in how to unlock your creative potential. He has given numerous talks on creativity and innovation to global organisations including IBM, Barclays Bank, and Pernod Ricard.

Through his exhaustive research and practice, Michael has become a creative powerhouse himself. He came up with the big idea behind a UK government motorcycle safety TV campaign which contributed to a significant reduction in road deaths, helped rebrand an ailing American food chain which led to its profits soaring by tens of millions of dollars, and is currently developing the world’s first systematic creative brain training app, to be launched this year. 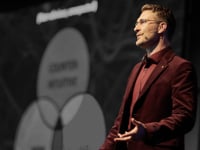 Dr. Bloomfield was the pinnacle of PHD Media’s annual thought leadership tech event, BrainScape. His background in anthropological studies, infectious sense of humor and natural stage presence were the perfect formula to an enthralling narrative on the history and powerful application of creativity. Without a doubt, Dr. Bloomfield was one of the best speakers we’ve had in the last eight years, leaving a room of C-suite executives inspired and equipped to take his transformative insights into action.
Raushanna Salhi Marketing & New Business Manager, MENA, PHD