Mat Honan is the San Francisco bureau chief for BuzzFeed News. Formerly a senior staff writer at WIRED, he has been writing about the technology industry and its impact on society for nearly 20 years.

While at WIRED,  Mat wrote a monthly column and multiple cover stories for the magazine, plus regular stories for the Web.  His work has also appeared in 7×7, The Awl, The Bold Italic, Budget Travel, Gizmodo, Macworld, Mother Jones, The National Journal, The New York Sun, O The Oprah Magazine, Popular Science, Runner’s World, Salon, The San Francisco Bay Guardian, The SF Weekly, Time,WIRED UK, and Women’s Health, among other places.

In 2008, Mat wrote a book for Gotham Books called “Barack Obama is Your New Bicycle”.

Since moving to Buzzfeed Mat has opened their San Francisco office, launched the BuzzFeed Open Lab, and overseen he launch of their tech news video program. 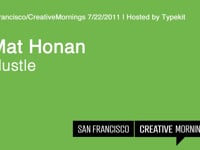