Long before Jon Stewart and Steven Colbert, there was Mark Russell, daring to joke and sing of the often absurd political process. He started in a little piano bar on Capitol Hill – right across from the lawmakers themselves.  As he puts it, “I started at the bottom and managed to work my way down.”  He began knowing little about politics, but was an immediate hit because he could find humour in anything.

Mark Russell spent 30 years on public television as host of the Mark Russell Comedy Specials, where it was consistently among the top-rated shows on that network. Today, his syndicated column is enjoyed all over America, as are his CDs, tapes and videos.  Mark Russell is on the road most of the year performing at colleges, conventions and in theaters.

Mark continues to play off the day’s headlines, performing stand-up comedy while accompanying himself on the piano.  With impeccable timing, twinkling eyes and shock-of-recognition insights into American politics, he draws merriment from the pomposity of public life. Reading three or four newspapers a day allows him to constantly update his material.  The result is that no two shows are ever identical. “I thrive on newspapers.” he frequently states, “and it looks like I’ll be thriving longer than them.”

And his answer to the frequently asked question, “Do you have any writers?” is “Oh, yes…I have 535 writers. One hundred in the Senate and 435 in the House of Representatives.” 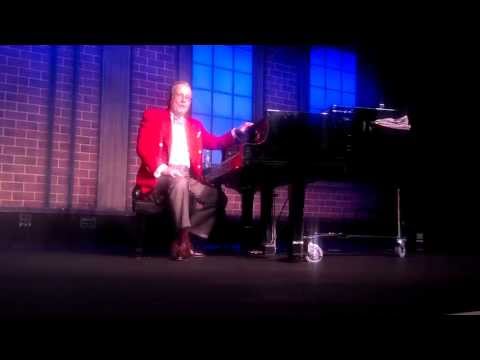