Elizabeth Bingham is a UK based business leader – she is the President of R3, the industry body for restructuring professionals.

Liz spent over thirty years at the EY, where she was a Managing Partner. During this time, she has developed a significant reputation as an ambassador for Diversity and Inclusion.

Liz has broken a number of ‘glass ceilings’ in her professional career. She came from a regular working class background, did not attend university and has always been an out lesbian. These factors made her an untypical candidate for success in the professional services industry. Nevertheless, encouraged by her mother that in “aiming for the moon she might hit the top of a tree”, she rose to the top of the industry.

Liz’s work in Diversity and Inclusion stems not just from an ethical concern but also from a practical viewpoint for companies. To fully capitalise on upcoming commercial opportunities, she believes businesses need to have diverse workforces that understand a variety of cultures and people.

In 2015, Liz was awarded an OBE for ‘services to equality in the workplace.’ This followed on from her being named as one of the 100 most powerful women in Britain by BBC Radio 4 Woman’s Hour.

She received the 2012 award for achievement from Women in Banking & Finance and was ranked No.31 in the World Pride Power List of influential LGBT people worldwide. 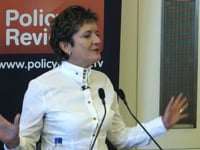