José Manuel Durão Barroso was President of the European Commission from 2004-14, and was previously Prime Minister of Portugal from 2002-04.

In 1999 he was elected President of the PSD Party in Portugal and was re-elected three times. During the same period, he served as Vice President of the European People’s Party. As Portuguese State Secretary for Foreign Affairs and Cooperation he played a key role as mediator of the peace accords for Angola in Bicesse (Estoril, Portugal) in 1991, and as Minister for Foreign Affairs he launched the talks with the Indonesian Minister of Foreign Affairs, under the auspices of the Secretary General of the United Nations, that ultimately led to the independence of East Timor. Under his leadership, the PSD won the general election in 2002 and he was appointed Prime Minister of Portugal in April of that year. He remained in office until July 2004 when he was nominated by the European Council and elected by the European Parliament to the post of President of the European Commission.

On the future of European integration (2014) 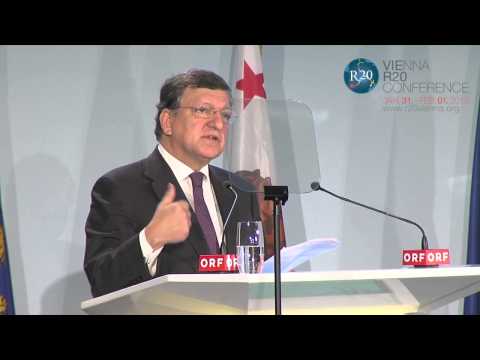 On the politics of tackling climate change (2013)