Jon Culshaw is warmly regarded by many as Britain’s best impressionist. With a catalogue of over 350 characters ranging from Boris Johnson to Professor Brian Cox. From Barack Obama to Alan Carr. From John Bishop to Michael McIntyre.

His TV credits include Spitting Image, Dead Ringers, The Impressionable Jon Culshaw, 2DTV, Head Cases, Jon Culshaw’s Commercial Breakdown and most recently teaming up with Debra Stephenson for The Impressions Show on BBC1.

With an unmatched versatility, Jon is regularly called upon for a host of guest appearances. Other credits include Parkinson, The Royal Variety Performance, We Are Most Amused, The Secret Policeman’s Ball, Friday Night with Jonathan Ross, Who Wants to be a Millionaire and Stargazing Live.

Jon first made international headlines in 1998 by calling the switchboard of No10 Downing Street and fooling the operators with his William Hague Impression. He was put directly through to have a conversation with Prime Minister Tony Blair. The incident was mentioned at Prime Minister’s Question Time and reported in Hansard.

Jon is also a regular guest on election programmes providing necessary comic relief with impromptu impersonations of politicians and commentators and can regularly be heard on radio shows including The Now Show and Secret World (BBC Radio 4).

Recently Jon has become a regular team member of the world’s longest running programme The Sky at Night. First appearing with Sir Patrick Moore on the show’s 50th anniversary in April 2007 and is part of the judging panel for the Royal Society’s Winton Prize for Science Books. As a lifelong astronomy enthusiast Jon’s role on The Sky at Night is to ask the scientists the kind of questions that the viewers might have. As he describes it ‘Simply the best job on Earth’. 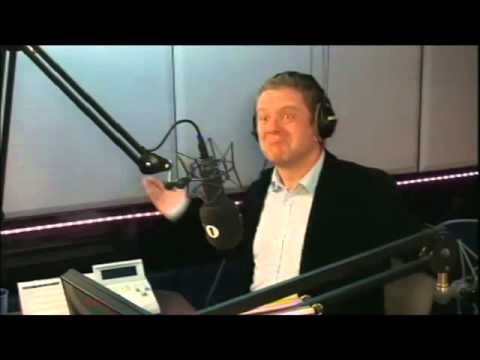 Interview on The Chris Moyles Show (2012)