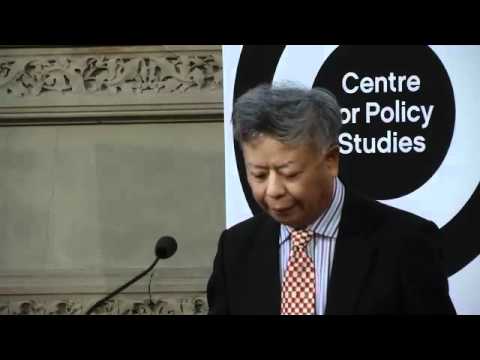 ‘China’s approach to the globalised economy’ (2012)

Mr. Jin Liqun is Head of the Working Group for Establishing Asian Infrastructure Investment Bank (AIIB). He was previously Chairman of China International Capital Corporation (CICC) from 2013-14. A former Deputy Minister of Finance, he is one of China’s – and Asia’s – most distinguished and influential economists.

From 1998-2003, Mr Jin served as Deputy Minister of Finance for the People’s Republic of China (PRC). In this role, he worked on a number of bilateral and multilateral economic and financial forums, such as the China-US Joint Economic Committee, China- UK Economic and Finance Dialogue, APEC Finance Ministers’ Meeting, ASEAN Plus Three, and G-20. He also served as a member of China’s Monetary Policy Committee and the Anti-Terrorism Committee of the PRC.

From 2003-08, Mr. Jin was the Ranking Vice President of the Asian Development Bank (ADB), responsible for operations in Central, South and West Asia. He was also responsible for the Private Sector Operations Department which covers all of the ADB’s borrowing members. Following from this, Mr. Jin served as Chairman of the Board of the Supervisors for China Investment Corporation (CIC) from 2008-13.

He is the Honourary Chair of the International Forum of Sovereign Wealth Funds.