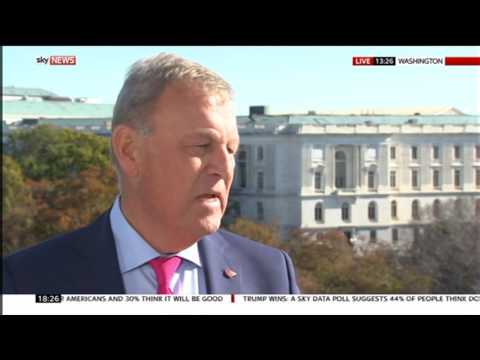 Jeremy Thompson is one of the UK’s most experienced television newsmen, with more than 40 years in the business. He presented Sky’s main evening news for 18 years until his retirement at the end of 2016, often anchoring programmes on location – anywhere from war zones to natural disasters, big elections to major crime scenes.

He has won numerous awards for his work including two Emmys from the US Academy of TV Arts and Sciences, three Gold Medals for Best News Reporter from the New York TV Festival, and the Royal Television Society Award for Sky’s coverage of the Kosovo conflict. He was named RTS Presenter of the Year in 2006 and in 2016 his programme Live at Five won RTS News Programme of the Year.

Jeremy began his career as a Reporter for the Cambridge Daily News and after stints at the BBC and subsequently as ITN’s Asia Correspondent based in Hong Kong and Africa Correspondent from Johannesburg, he joined Sky News in 1993.

As a foreign correspondent, Jeremy has covered more than 20 wars and civil conflicts. In 1989 he reported on the student uprising in Tiananmen Square. A decade later, he was the first TV newsman to broadcast live as British peacekeeping forces rolled into Kosovo. He covered the first Gulf War in 1990/91 and in 2003 he anchored Sky News’ coverage of the second Gulf War from Iraq and was the first tv newsman to present from inside Baghdad. In South Africa, he covered the last year of apartheid and Mandela’s extraordinary journey from prisoner to the Presidency. Also in Africa, he reported on the genocide in Rwanda and civil conflicts in Somalia, Sudan, Angola, Mozambique and Sierra Leone.

In recent years Jeremy has been involved in many of Sky News’ biggest live news events, anchoring both from the studio and out in the field. These have included the terrorist attacks of 9/11, the Soham murders, the Madrid train bombing, the Indian Ocean Tsunami, the Israel-Lebanon Conflict, the 7/7 bombings in London and the death of Pope John Paul II. He has covered five Olympic Games, British Elections dating back to Margeret Thatcher’s first victory in 1979, and six US elections.

In 2015 he presented Sky News Live from the streets of Paris on the Charlie Hebdo attack and the multiple terror attacks in the city. He also reported live from Brussels in the aftermath of the 2016 series of terror attacks. His final days at Sky News ended with Jeremy in the US, covering the dramatic victory of Donald Trump as US President.