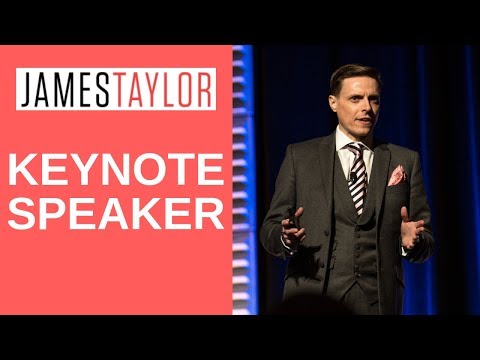 James Taylor’s life mission is to unlock the creative potential in one billion people. For over 20 years, he has been advising CEO’s, entrepreneurs, educators, governments and leaders from Silicon Valley to Singapore on how to build innovative organizations, unlock creative potential, and increase productivity. In this tailored, entertaining and highly visual keynotes, James Taylor takes the audience on a journey to discover the backstage secrets of the world’s most creative individuals and innovative organizations. Blending inspiring stories, cutting-edge research, and actionable takeaways, he shows how any individual or organization can dramatically increase productivity and innovate by augmenting their human creativity using artificial intelligence.

His clients have included Fortune Global 500 companies, government policy makers, industry associations, and he was recently the subject of a 30 minute BBC documentary about his life and work.

Here are six connected aspects of James’ work:
1. Creativity Expert. Through his writing, podcast show and YouTube series, he’s taught hundreds of thousands of individuals in over 120 countries about the art and science of creativity. As the founder of C.SCHOOL™ and the host of multiple global summits he has personally interviewed over 500 of the world’s leading creative minds including Silicon Valley tech CEO’s, New York Times bestselling authors, Grammy award winning music artists and artificial intelligence pioneers.

2. Keynote Speaker. As an international keynote speaking on business creativity, innovation and artificial intelligence he is passionate about delivering experiences on stage which inspire, educate and entertain audiences. He has spoken at conferences across North America, Europe, South America, Asia and the Middle East.

4. Entrepreneur. Having started his first business at age 17, he went on to launch, build and sell businesses in the entertainment, publishing, technology and education industries in both Europe and USA. An entrepreneur with a global outlook he has lived and worked in the San Francisco Bay Area, Vancouver, London, Scotland, Italy and Asia. He was awarded the S.D. Southern Prize from Canadian energy services company ATCO and named ‘ONTRApreneur of the Year’ from U.S. business and marketing automation leaders ONTRAPORT.

6. Drummer. Beginning at age ten, James followed in the footsteps of his father and grandfather by becoming a jazz musician. He went on to record on several best-selling jazz albums, toured the world (several times), played stadium shows, and performed with artists including French jazz violinist Stephane Grappelli, The Grateful Dead’s David Grisman, pop singer Mick Hucknall and the Spice Girl’s Mel C!