Howard Schmidt currently serves as a partner in the strategic advisory firm, Ridge-Schmidt Cyber, an executive services firm that helps leaders in business and government navigate the increasing demands of cybersecurity. He serves in this position with Tom Ridge, the first secretary of the Department of Homeland Security. He also serves as executive director of The Software Assurance Forum for Excellence in Code (SAFECode).

He brings together expertise in business, defence, intelligence, law enforcement, privacy, academia and international relations, gained from a distinguished career spanning 40 years. He most recently served as Special Assistant to the President and the Cybersecurity Coordinator for the United States. In this role Howard was responsible for coordinating interagency cybersecurity policy development and implementation and for coordinating engagement with federal, state, local, international, and private sector cybersecurity partners. His former White House appointments include Cyber Advisor to Presidents Barack Obama and George W. Bush.

Howard also brings to bear over 26 years of military and law enforcement service. Beginning active duty with the Air Force, he later joined the Arizona Air National Guard. With the AF he served in a number of military and civilian roles culminating as Supervisory Special Agent with the Office of Special Investigations (AFOSI). He finished his last 12 years as an Army Reserve Special Agent with Criminal Investigation Division’s (CID) Computer Crime Unit, all while serving over a decade as police officer with the Chandler Police Department.

He has testified before congressional committees, written books on cybersecurity, and received numerous awards, including the CSO Magazine ‘‘Compass Award,’’ Baseline Magazine’s ‘‘The 50 Most Influential People in Business IT,’’ and the Federal 100 Award, to name just a few. He currently is a Professor of Research at Idaho State University. He also is a member of the World Federation of Scientist, Permanent Monitoring Panel on Information Security, Adjunct Distinguished Fellow with Carnegie Mellon’s CyLab, and Distinguished Fellow of the Ponemon Institute.

How Gov't Can Improve Cybersecurity (2015) 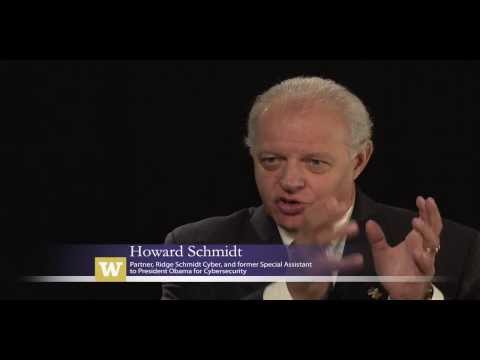 An Interview with Howard Schmidt (2013)

Interested in booking Howard Schmidt to speak at an event? Please provide your details and we’ll get in touch within 24 hours.