George the Poet is a British spoken-word artist, Peabody award winner, podcast host, rapper and poet who has been in the industry for over a decade as a social commentator. He is a critically acclaimed, engaging and thought-provoking speaker in social and political topics.

In 2020 George was approached by Sweeet Capital, an investment company, and together they launched a video and podcast series that features stories about entrepreneurship in an authentic and genuine way. In addition to this, the partnership will also launch a speaker series titled Sweet Founder Journeys which will focus on black entrepreneurs.

In 2019 he launched his award-winning podcast series “Have You Heard George’s Podcast”, where he regularly incorporates lived experiences, fiction, music, storytelling and poetry to create a refreshing podcast that is unique and inspiring. The podcast, which was the first outside of the United States to win a Peabody award in 2019, is popular with people across all demographics and in different countries and allows fans to immerse themselves in the storytelling experience.

Prior to being an esteemed podcaster and poet, George was a rap, hip-hop and grime artist, and he released his critically acclaimed debut EP The Chicken and the Egg under Island Records. He renounced himself from the label before releasing his debut album as he felt he couldn’t communicate with his audience effectively and opted to pursue poetry as it was a less constrictive art form. George published his wildly popular autobiographical book titled Search Party (2015), an aptly named compilation of his poetry that is relished by fans.

George has been nominated for four awards at the 2021 Audio and Radio Industry Awards, including Best Speech Presenter and The Creative Innovation Award. In 2020 he was elected Influencer of the Year at the Visionary Arts awards and Best Presenter – Speech at the Audio Production Awards. His podcast won Best Podcast Series at the Webby Awards; it was voted Podcast of the Year by the Broadcasting Press Guild and Best Podcast by NME. In addition to the Peabody award in 2019, Have You Heard George’s Podcast won five British Podcast Awards in the same year for; Best Arts & Culture podcast, Best Fiction podcast, Best New podcast, Smartest Podcast and Audioboom Podcast of the Year. George’s work on the podcast also earned him the coveted Artist of the Year at the Lovie Awards.

In 2018 George, who had recently been elected as a Member of the National Council of Arts Council England, was invited to compose a love poem for the royal wedding of Prince Harry and Meghan Markle. He titled the poem The Beauty of Union, and he delivered it as an opener for the BBC broadcast of the event.

In 2021 George was awarded an honorary PhD from the University of London, and he is studying at the University College London for his PhD in Economics. This degree will be an addition to the  Politics, Psychology and Sociology degree he obtained from King’s College, Cambridge, in 2013.

George is an esteemed and well-respected poet and social activist whose innovative brand of encouraging people to explore their ideas and experiences has propelled him as a captivating speaker on politics, economic progress and social power.

Videos of George the Poet 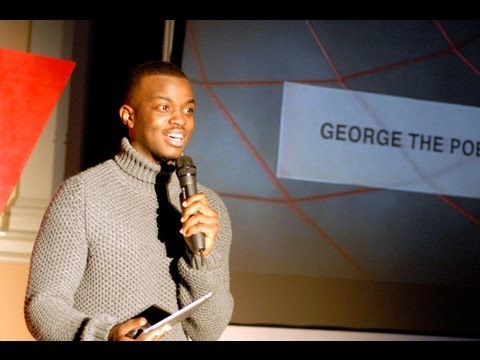 The Power of Youth: George The Poet at TEDx Youth