George Papaconstantinou is a Greek economist and politician who has served government at the highest level and at a critical time. As the Greek Minister of Finance, he was one of the key policy makers at the outset of the Eurozone crisis. He was the person who uncovered the truth about Greek statistics and negotiated the first 110 billion Euro bailout with Greece’s European partners and the IMF, together with the associated framework for economic and financial policies.

The experience of this momentous period is detailed in his best–selling book, Game Over: The Inside Story of the Greek Crisis, which has been reviewed by the Financial Times, the Wall Street Journal and the Times Literary Supplement.

“In this real-life political thriller, former Greek Finance Minister George Papaconstantinou tells the inside story of the years during which the Greek drama changed Europe and riveted the world. It is the story of a country forced by past mistakes into unprecedented actions with enormously painful consequences. A story about the people who shaped events by trying to respond to rapidly evolving circumstances often beyond their control. About decisions – good and bad, right and wrong – taken in official and behind-the-scenes gatherings in Brussels, Berlin, Frankfurt, Paris, London, New York, Washington and Athens; in Luxembourg châteaux courtyards, Davos kitchens and Bilderberg gatherings; in elegant offices and dreary basement meetings rooms.”

George was born in Athens in 1961, and studied in the UK and the US, obtaining a Ph.D in Economics from the London School of Economics. He worked for 10 years as a senior economist at the OECD in Paris, before returning to Greece to serve in a policy advisory capacity for the Greek government. In 2007, he was elected to the Greek Parliament, and two years later, to the European Parliament. In October 2009 he was appointed Finance Minister in the government of George Papandreou and subsequently also served as Minister for the Environment, Energy and Climate Change. He is currently working in an advisory capacity in the private sector.

George is an exceptional public speaker with an important and fascinating story to tell, told through the eyes not of a simple bystander but of one of its protagonists. His first-hand experience in the management of the Greek and Eurozone crisis makes him an authoritative voice with insights that are important in the context of the discussion on the future direction of Europe and the evolution of the global financial system.

To enquire about George Papaconstantinou‘s availability please contact us here. 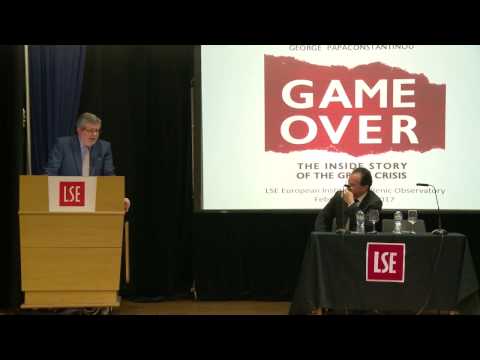 Game Over: The Inside Story of the Greek Crisis