George Friedman is a New York Times bestseller and geopolitical forecaster with more than two decades of experience in intelligence consulting and publishing. He is the founder and Chairman of Geopolitical Futures and is highly sought after at industry events as an expert strategist and speaker on international affairs.

Geopolitical Futures, founded in 2015, is an online publication that focuses on analysing and forecasting global events as a guide to navigate the future. With George’s stellar reputation and expertise, the publication is used as a driving force to predict geopolitical events. Prior to Geopolitical Futures, George founded a private forecasting and intelligence publishing company called Stratfor. The company, based in Texas, USA, was founded in 1996, and he served as the CEO and Chief Intelligence Office until his resignation in 2015.

George is a well-established author who has published several books, including The Storm Before the Calm (2020), which outlines the challenges the United States will face in the 2020s in what would be described as a ‘crisis decade’. He correctly forecasted Russia’s re-emergence in Flashpoints (2015) and in his book The Next Decade (2011) he outlined the skills that future leaders would require and the United States need to create regional power balances. His most engaging and fascinating work is the 2009 acclaimed New York Times bestseller titled The Next 100 Years, where he outlines the political and economic crisis in the EU and China’s economic decline. One of his earliest publications was a book he co-authored titled The Coming War with Japan (1991), where he forewarned a potential conflict between Japan and the United States following the dismantling of the Soviet Union.

In a quest to share his knowledge and expertise, George has been featured in many publications and online media, including Bloomsberg, Daily Pioneer, Forbes, CNBC and Business Insider.

George obtained his PhD in government from Cornell University in 1970, and prior to that, he received his BA Honors in political science from The City College of New York.

Hungarian-born and immigrating to the United States as a child, George is an admired and well-respected speaker who is internationally recognised as a pioneer and is celebrated for his ability to analyse and portray the geopolitical landscape strategically. 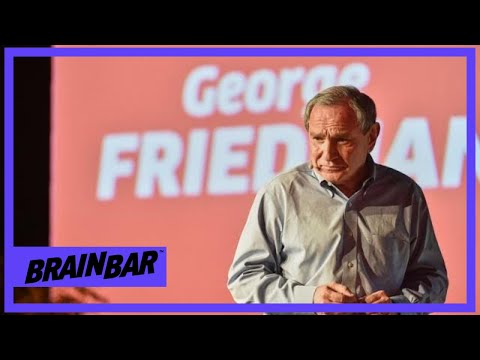 Is There a Global War Coming? | George Friedman at Brain Bar

The Storm Before the Calm: America's Discord, the Coming Crisis of the 2020s, and the Triumph Beyond

Flashpoints: The Emerging Crisis in Europe

The Next 100 Years: A Forecast for the 21st Century