Frederik Imbo is an expert in communication and Neuro-Linguistic Programming (NLP), an actor and a popular keynote speaker.

He is the Founder of Imboorling, where he provides interactive training, workshops and presentations to encourage personal growth to a variety of institutions, companies, schools, governments, associations and at conferences. Frederik is an expert in stimulating and guiding individuals to develop their communication skills, by providing them with tools and knowledge to do so. Frederik also provides one-to-one coaching for politicians and business leaders looking to develop similar skills.

Frederik delivered a highly-popular talk titled ‘How not to take things personally’ at TEDxMechelen. The video, which has been viewed over 8 million times, has captured the attention of people over the world and is Belgium’s most-watched TED talk ever. In the talk, Frederik explores how taking things personally is giving the power to other people and the question “Do you want to be right or do you want to be happy?”

Frederik completed a bachelor’s degree in theatre at the University of Ghent, where he first discovered his passion for communication. He applied his theatre skills to the study of communication, and completed a master’s degree in Neuro-Linguistic Programming (NLP). He also completed a master’s in Transpersonal Coaching and Counselling. Frederik has continued to develop his knowledge and skills in this area, having also completed qualifications in Connecting Communication and non-violent communication, which he completed in the US with the famous American Psychologist, Marshall Rosenberg. Frederik is a certified practitioner in Insights Discovery (a concept on the psychological preferences of individuals that is based on the ideas of Carl Gustav Jung).

As an actor, Frederik has appeared in several Belgian television shows, films and in the theatre. Highlights include playing the voice of Viktor Krum in the Flemish version of Harry Potter and playing Maxime in the film ‘Collision in Moscow’.

Frederik is an entertaining, high-energy speaker, who uses his expertise, knowledge and sense of humour to engage, motivate and inspire his audiences. 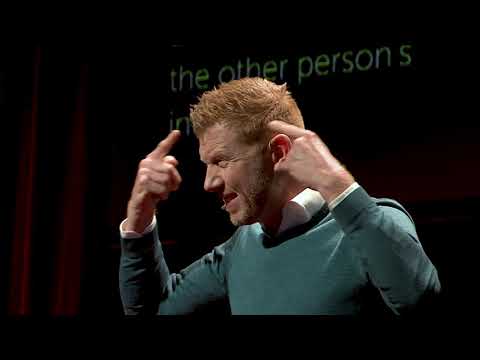 How not to take things personally? | Frederik Imbo | TEDxMechelen