Dr. Fatih Birol is the Executive Director of the International Energy Agency (IEA) since 2015.  Under his leadership, the IEA undertook a major modernisation programme, its first since its creation in 1974. Prior to becoming Executive Director, he spent 20 years as an IEA staff member, serving most recently as Chief Economist.

He also chairs the World Economic Forum’s (Davos) Energy Advisory Board and served on the UN Secretary-General’s Advisory Board on ‘Sustainable Energy for All’.

Prior to his current role, he was the IEA Chief Economist with overall responsibility for the organisation’s economic analysis of energy and climate change policy. He oversaw the annual World Energy Outlook, which is the flagship publication of the IEA and is recognised as the most authoritative source for energy analysis and projections. He was also responsible for the IEA Energy Business Council which provides policymakers with a business perspective on energy market issues.

Throughout his career, Dr. Birol has been given numerous awards in recognition of his contribution to the energy debate.  In 2009, alongside awards from the Dutch Ministry of Economic Affairs and the Polish Ministry of Economy, Dr. Birol was honoured with the Federal Cross of Merit of the Federal Republic of Germany. He was awarded the Golden Honour Medal of the Austrian Republic in 2007 and was made a Chevalier dans l’ordre des Palmes Academique by the French Government in 2006. He received the annual award of the International Association of Energy Economics for ‘Outstanding Contribution to the Profession’ in 2005. These followed awards from the U.S. Department of Energy in 2004 and the Russian Academy of Sciences in 2002.

In May 2021, a report from the IEA stated that there is no longer any need to invest in new fossil-fuel supply infrastructure. In October 2021, they called for a tripling of global investment in clean energy and related technologies—some $4 trillion annually by 2030. “A new global energy economy is emerging,” Birol says. “Clean-energy technologies are slowly but surely going to replace the existing energy industry.”

He has been named by Forbes Magazine as one of the most influential people in world energy. 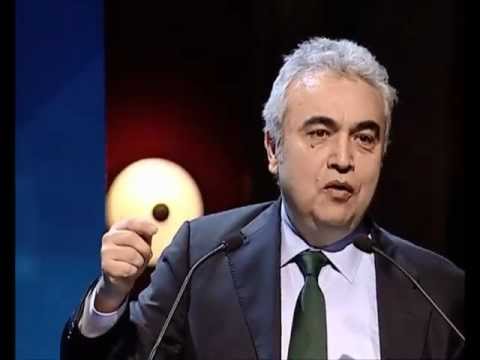 On recent changes in the global energy market (2013)