Dr. Edith Eva Eger is a sought-after clinical psychologist, helping individuals discard their limitations, discover their powers of self-renewal, and achieve things they previous thought unattainable. As a thriving survivor of Auschwitz, she is an acclaimed expert in trauma recovery, inspiring speaker, human dignity advocate, and author. Her story of survival, freedom, and forgiveness is remarkable and inspiring.

“The Choice” (2017) weaves Dr. Eger’s personal story with case studies from her work as a psychologist. Her patients and their stories illustrate different phases of healing and show how people can choose to escape the prisons they construct in their minds and find freedom, regardless of circumstance.

In 1944, 16-year-old Edith Eger was sent to Auschwitz, where she endured unimaginable experiences, including being made to dance for the infamous Josef Mengele. Over the coming months, Edith’s bravery helped her sister to survive and led to her bunkmates rescuing her during a death march. When their camp was finally liberated, Edith was pulled from a pile of bodies, barely alive.

Using her past as a powerful analogy, Dr. Eger inspires people to tap their full potential and shape their very best destinies. It’s a message of healing and personal growth. A message of freedom from self-imposed limitations. A message that helps people build character, deal effectively with life’s events, and enrich the lives of others.

Dr. Eger is a member of several professional associations. She has a clinical practice in La Jolla, California and holds a faculty appointment at the University of California, San Diego. She has appeared on numerous television programs including CNN and the Oprah Winfrey Show; and was the primary subject of a holocaust documentary that appeared on Dutch National Television. She speaks on today’s most relevant topics and tailors her presentations to the unique requirements of business, educational institutions, government, the military, healthcare, and religious, civic, and community organizations.

What my mama told me: Edith Eva Eger at TEDxLaJolla

The Choice: Embrace the Possible

At the age of sixteen, Edith Eger was sent to Auschwitz. Hours after her parents were killed, Nazi officer Dr. Josef Mengele, forced Edie to dance for his amusement and her survival. Edie was pulled from a pile of corpses when the American troops liberated the camps in 1945.

Edie spent decades struggling with flashbacks and survivor’s guilt, determined to stay silent and hide from the past. Thirty-five years after the war ended, she returned to Auschwitz and was finally able to fully heal and forgive the one person she’d been unable to forgive—herself.

Edie weaves her remarkable personal journey with the moving stories of those she has helped heal. She explores how we can be imprisoned in our own minds and shows us how to find the key to freedom. The Choice is a life-changing book that will provide hope and comfort to generations of readers. 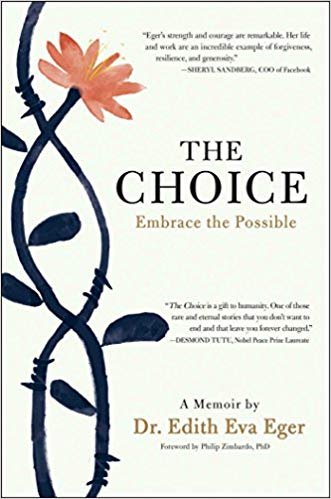