David Lim is best known for leading the 1st Singapore Mt Everest Expedition in 1998 which succeeded in placing two members on the summit. The climb captured the imagination of the entire country and helped reset the parameters of what could be achieved by the small, flat, tropical island nation.

A week after his return from Everest, David was totally paralysed by the rare nerve disorder Guillain-Barre Syndrome. Artificially ventilated for 42 days, he spent six months in hospital before returning home. Though he was permanently disabled in both legs, he made a dramatic comeback to climbing the world’s great mountains, and returned once more to Everest in 2001.

David’s climbing resumé includes leadership in over 70 mountain ascents including two expeditions to Mt Everest and many Southeast Asian first ascents. In 2005, he made the third solo ascent ever of the world’s highest volcano, and three virgin peak ascents in Central Asia. In 2007, he and his partner made a rare crossing, on foot and unsupported, across the Salar de Uyuni, the world’s largest salt desert. After climbing his seventh virgin peak (Qinghai, China, Sep 2012),  The Sunday Times described him as “unstoppable”.

David leads Everest Motivation Team, Inc, a company that helps organisations build teams and grow leaders through consulting, speaking, and programmes. In the corporate world, he spent nearly a decade in the media industry with positions in marketing, journalism management and multimedia. His other positions include being and adjunct lecturer at INSEAD Business School (since 2000), where he delivers some of the leadership modules. 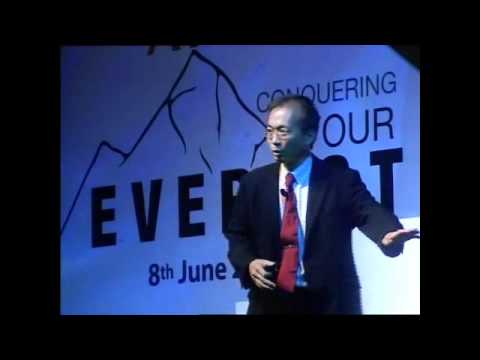 Interested in booking David Lim to speak at an event? Please provide your details and we’ll get in touch within 24 hours.