Leading labour economist based in the US

He was an external member of the Bank of England’s interest rate-setting Monetary Policy Committee (MPC) from June 2006 to June 2009, sometimes participating by conference call. While on the MPC David voted consistently for low interest rates; he believes Bank of England growth forecasts for the UK are optimistic, and that interest rates will have to remain at 1% or below for the next five years as the UK recovers from a ‘once in a hundred year’ event.

David received the Princeton University’s Richard A. Lester Prize for “the most outstanding book in Industrial Relations and Labor Economics published in 1994”, and was named the “Business person of the year” by the Daily Telegraph, in their Great Britons of 2008 awards. He was also made a Commander of the British Empire (CBE) in the Queen’s Birthday Honours List in June 2009, for “services to the Monetary Policy Committee and economics”.

"David’s economic interests lie in jobs and wages and happiness - stuff that actually matters to ordinary people, but which researchers usually ignore: “the economics of walking about: you ask people what’s going on in their lives and you take seriously what answers they give you”. He is a Bloomberg TV contributing editor and an economics columnist in the Independent."


Not Working: Where Have All the Good Jobs Gone?

Don’t trust low unemployment numbers as proof that the labor market is doing fine—it isn’t. Not Workingis about those who can’t find full-time work at a decent wage—the underemployed—and how their plight is contributing to widespread despair, a worsening drug epidemic, and the unchecked rise of right-wing populism.

In this revelatory and outspoken book, David Blanchflower draws on his acclaimed work in the economics of labor and well-being to explain why today’s postrecession economy is vastly different from what came before. He calls out our leaders and policymakers for failing to see the Great Recession coming, and for their continued failure to address one of the most unacknowledged social catastrophes of our time. Blanchflower shows how many workers are underemployed or have simply given up trying to find a well-paying job, how wage growth has not returned to prerecession levels despite rosy employment indicators, and how general prosperity has not returned since the crash of 2008.

Standard economic measures are often blind to these forgotten workers, which is why Blanchflower practices the “economics of walking about”—seeing for himself how ordinary people are faring under the recovery, and taking seriously what they say and do. Not Working is his candid report on how the young and the less skilled are among the worst casualties of underemployment, how immigrants are taking the blame, and how the epidemic of unhappiness and self-destruction will continue to spread unless we deal with it. 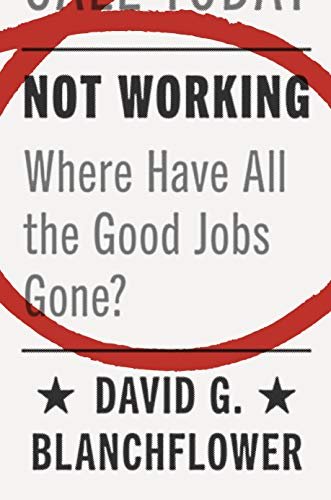