Dan Heath is a sought-after speaker and co-author of four New York Times best-selling books. He is also the author of Upstream: The Quest to Solve Problems Before They Happen and one of America’s most respected speakers and Senior Fellow at Duke University’s Center for the Advancement of Social Entrepreneurship.

Heath specialises in presenting audiences strategies on how they can lead change effectively while making their decisions more soundly based on knowledge that will benefit all levels. He is also known for combining entertaining narrative with practical information that both informs and entertains, which he weaves together with research-based techniques, fascinating tales, and a sprinkling of humour.

Dan Heath has co-authored, with his brother Chip, The Power of Moments: Why Certain Experiences Have Extraordinary Impact (2017), Decisive: How to Make Better Choices in Life and Work (2013), Switch: How to Change Things When Change Is Hard (2010) and Made to Stick (2007). The Heath Brothers’ work has been published in 33 languages and has sold over 3 million copies worldwide.

Dan’s latest book, Upstream: The Quest to Solve Problems Before They Happen (2020), examines a critical question: how can we anticipate problems before they occur? Why are we so prone to being caught in a loop of reaction—fighting fires, reacting to crises—when we could have prevented the issues we’re dealing with. Upstream studies leaders who have succeeded in preventing major crises. The methods employed by these leaders to overcome what were considered intractable challenges, customer churn, chronic disease, homelessness, and dropouts, are all detailed in the book.

Dan also worked as a former Harvard Business school case writer and researcher and he also co-founded Thinkwell (founded in the late 1990s), a pioneering publishing company creating a range of college textbooks that presents video lectures from top professors from around the country.

He has received numerous accolades, including Fast Company’s list of the Most Creative People in Business and added to the Thinkers 50 list, a list of the world’s top management thinkers. The Heath Brothers book “To Make It Stick” was named the Best Business Book of the Year by BusinessWeek, and it spent 24 months on their bestseller list. His favourite geeky moment was winning the 2005 New Yorker Cartoon Caption Contest, edging out 13,000 other contestants.

Dan is a Harvard Business School MBA graduate and completed his B.A. at the University of Texas from the Plan II honours program. 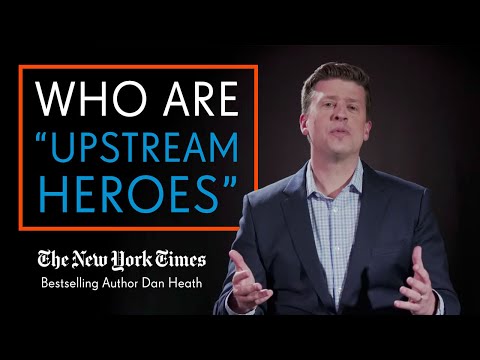 Switch: How to Change Things When Change Is Hard

Decisive: How to Make Better Choices in Life and Work

The Power of Moments: Why Certain Experiences Have Extraordinary Impact

Upstream: The Quest to Solve Problems Before They Happen