Cynthia Carroll is a powerhouse in the world of commodities. She was the chief executive officer of Anglo American PLC, the world’s fourth largest mining company, where she oversaw growth of the company, with interests in platinum, coal, gold, industrial minerals and diamonds. She is currently a non-executive director of BP, a position which she took up in 2007.

Hired by Anglo American in 2006, Cynthia became the first chief executive to come from the outside in the company’s 90-year history, its first female leader, and its first non-South African chief executive. As one of the most influential women in the industry, she was one of only three female Chief Executives of FTSE 100 companies. Operating in 45 countries with 150,000 employees, Cynthia was also chairman of Anglo Platinum Limited and of De Beers s.a, which produces 35% of the world’s diamonds. She stepped down from these roles in April 2013.

Cynthia is known for encouraging innovation and setting high safety targets. She previously worked with the Montreal, Canada head-quartered Alcan, as President and Chief Executive Officer of the Primary Metal Group since 2002. She joined Alcan in 1989. In January 1996, she was promoted to managing director of the Aughinish Alumina division, located on Aughinish Island, Askeaton, County Limerick, Ireland. Before joining Alcan, she worked for Amoco, which is now part of British Petroleum, for eight years as a petroleum geologist, from 1982 to 1987, working in gas and oil exploration in Colorado, Alaska, Wyoming, Utah, and Montana. 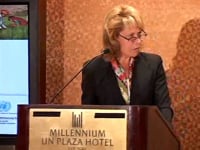 The Business of Development (2010)