Academy Award, Golden Globe, Emmy and Grammy-winning artist, actor, and activist, Common continues to break down barriers with a multitude of critically acclaimed, diverse roles, and continued success at the box office.

Following his 2011 memoir One Day It’ll All Make Sense, Common’s book Let Love Have the Last Wordwas released on May 7th, 2019. In Let Love Have the Last Word, the Chicago native reflects on his very personal journey and the raw moments that have shaped him into the father, son and man he is today. The book takes a therapeutic look back at Common’s life on the road, parenting his daughter, Omoye, his romantic relationships, and the complexities of living with aging parents. He finds himself revisiting his last moments with his ailing father, sharing the stage with the late Dr. Maya Angelou, and discussing new insights into his patterns of behavior with his therapist. Told in four parts in a stream of consciousness style, Let Love Have the Last Word is a rare and intimate look at a genius mind in constant evolution.

He’s renowned for his roles in films such as Selma, Barbershop and John Wick 2; his lasting influence on hip-hop culture, and his recurring role in the Showtime series he and Lena Waithe executive produce, The Chi. He starred in a number of films in 2018 including the animated Warner Bros’ Smallfoot and the critically acclaimed Fox film The Hate U Give. Up next he will be seen in the action film The Informer; The Kitchen with Melissa McCarthy, Tiffany Haddish and Elizabeth Moss; and Eve opposite Jessica Chastain.

Born as Lonnie Rashid Lynn, Jr., he was raised in Chicago by his mother, a teacher, and stepfather. His debut 1992 album Can I Borrow a Dollar? garnered him a significant underground following into the late 1990s, after which he gained notable mainstream success through his work with the Soulquarians. Throughout his career, he has been nominated 16 times for the Grammys, winning three as well as an NAACP Image Award for Outstanding Supporting Actor for his work in Selma. Common won the 2015 Golden Globe Award for Best Original Song and the 2015 Academy Award for Best Original Song, for his song Glory from the 2014 film Selma, in which he co-starred as Civil Rights Movement leader James Bevel. Common was nominated for an Oscar, a Grammy and NAACP Image Award for his song Stand Up For Something, which he co-wrote with Diane Warren.

For the past few years, Common has dedicated countless hours and has been deeply engaged in social justice and advocacy work around mass incarceration, mental health and voting. After the success and impact of his Imagine Justice concert in 2017 and his Hope & Redemption Tour to eight different prisons, Common decided to establish and launch Imagine Justice as a new nonprofit in 2018. Centered at the intersection of art and activism, Imagine Justice is dedicated to leveraging the power of art to advocate for communities around the country, to fight for justice and equality and to stand united against injustice wherever it appears. 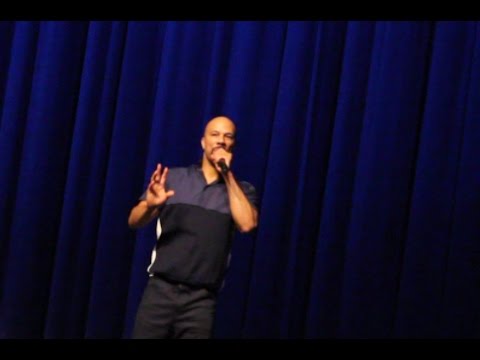