Buzz Aldrin is a former astronaut and fighter pilot. Buzz Aldrin is now is a keynote speaker who tells the story of how he graduated 3rd in his class at West Point, was a jet fighter pilot in Korea, and earned his Doctor of Astronautics from MIT. Aldrin made three spacewalks as pilot of the 1966 Gemini 12 mission, and as the Apollo Lunar Module pilot on the 1969 Apollo 11 mission. He and Neil Armstrong were the first two humans to walk on the moon.

Upon his return from the moon, Aldrin was awarded the Presidential Medal of Freedom; the highest American peacetime award. He received numerous distinguished awards from 23 other countries during a 45-day international goodwill tour after. Aldrin was awarded the Congressional Gold Medal in 2011, the nation’s highest civilian honor, alongside the other Apollo 11 crew members.

Since his retirement from NASA and the Air Force, Aldrin has remained at the forefront to ensure America’s continued leadership in human space exploration. He founded Starcraft Boosters, Inc., and the ShareSpace Foundation which is a non-profit devoted to advancing space education, exploration and affordable space flight experiences for all. In June 2011 Buzz started a new company, Buzz Aldrin Enterprises, LLC to promote his brand and oversee all aspects of his public appearances, media, licensing, endorsements and efforts to promote the future of the space program. He created a master plan for Mars missions, known as the “Aldrin Mars Cycle” – a spacecraft system with perpetual cycling orbits between Earth and Mars.

Aldrin is also the author of eight books, including his New York Times best-selling autobiography entitled, Magnificent Desolation, published in 2009 and released just before the 40th Anniversary of the Apollo XI moon landing. Aldrin’s mission since his retirement from NASA and the Air Force remains as he continues to inspire today’s youth with his illustrated children’s books, Reaching for the Moon, and New York Times best-seller, Look to the Stars. His non-fiction work include the best-seller historical documentary, Men from Earth and an early 1970’s autobiography, Return to Earth. In 2013, he published Mission to Mars: My Vision for Space Exploration which outlines his plan to help humans reach beyond the moon and on to planet Mars. 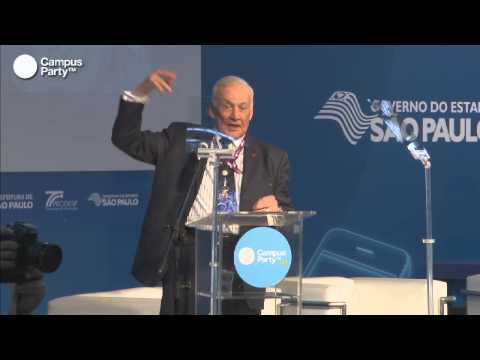