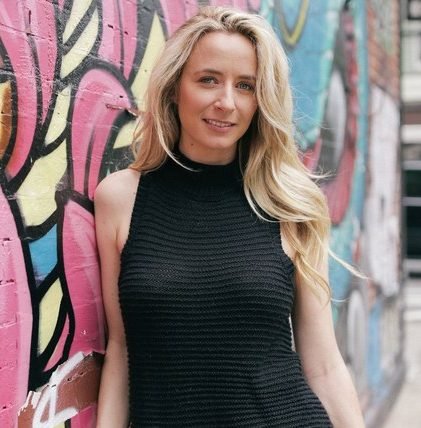 Bryony Cole is a sex futurist who speaks globally about the impact technology is having on intimacy. Her podcast and event series Future of Sex reaches thousands every month to explore the merging worlds of sex and tech. Mashable has called it ‘the podcast helping women to build the future of sextech’, and it has been featured in global media such as The New York Times, Wired, TechCrunch, Vice, Thrillist, and The Humanist. As a leader in sextech, Bryony led North America’s first sextech hackathon and Copenhagen’s first SexTech Summit at Techfestival. In 2018 she will produce Future of Sextech Hack, the first ever sextech hackathon in the southern hemisphere. She is passionate about encouraging more women to enter the industry and innovate around the often overlooked components of sexuality: education, assault reporting and women’s health.

In a past life, Bryony Cole designed Absolut Labs, a think tank on nightlife for Absolut. She also worked with companies like Microsoft to help them humanise technology and was responsible for driving customer experience and community success at Yammer which was bought for $1.2B by Microsoft.

Her talks are received around the world by a diverse audience across the world, from Parsons School of Design in New York to the Skolkovo Foundation in Russia. Future of Sex is currently part of an Australian government business accelerator HotDesQ to drive innovation and develop the sextech industry in Brisbane, Queensland. Recent engagements include Tech Open Air (Germany), Empress Capital, PEN World Voices Festival, Cycles + Sex (USA) Deakin University and Muru-d (Australia).