Anderson Cooper anchors Anderson Cooper 360°, an unconventional, wide-ranging news program airing on CNN/U.S. weeknights. Cooper, who joined CNN in December 2001, served as CNN’s weekend anchor before moving to prime-time in March 2003 following the war in Iraq and then to a late evening timeslot in November 2005 following Hurricane Katrina. His memoir, Dispatches from the Edge: A Memoir of War, Disasters, and Survival (2007) is a New York Times best-seller.

Since joining CNN, Cooper has anchored major breaking news stories, most recently the devastation caused by Hurricane Katrina along the Gulf Coast. He traveled to Sri Lanka to cover the tsunami and was in Baghdad for the Iraqi elections. Cooper also anchored much of CNN’s live coverage of the funeral of Pope John Paul II in the Vatican City as well as the Terri Schiavo story in Florida. He recently moderated the groundbreaking CNN/You Tube debate for Democratic presidential candidates from The Citadel in Charleston, S.C.

Dispatches from the Edge provides a rare up-close glimpse of what happens when the normal order of things is suddenly turned upside down, whether it’s a natural disaster, a civil war, or a heated political battle. From New Orleans to Baghdad, Cooper gives a deeply personal look into the crises he has witnessed firsthand and the surprising impact they have had on his life.

Cooper joined ABC from Channel One News, where he served as chief international correspondent. During that time, he reported and produced stories from Bosnia, Iran, Israel, Russia, Rwanda, Somalia, South Africa and Vietnam. He also reported national stories that were broadcast over the Channel One News school television network and seen in more than 12,000 classrooms nationwide.

Cooper and Anderson Cooper 360° have won several awards, most recently three Emmy awards in 2006 for reports about famine in Niger, Charity Hospital in New Orleans and black market infertility.  Cooper has also earned a National Headliners Award for his tsunami coverage, an Emmy Award for his contribution to ABC’s coverage of Princess Diana’s funeral, a Silver Plaque from the Chicago International Film Festival for his report from Sarajevo on the Bosnian civil war, a Bronze Telly for his coverage of famine in Somalia, a Bronze Award from the National Educational Film and Video Festival for a report on political Islam, and a GLAAD Media Award for Outstanding TV Journalism for his 20/20 Downtownreport on high school athlete Corey Johnson. 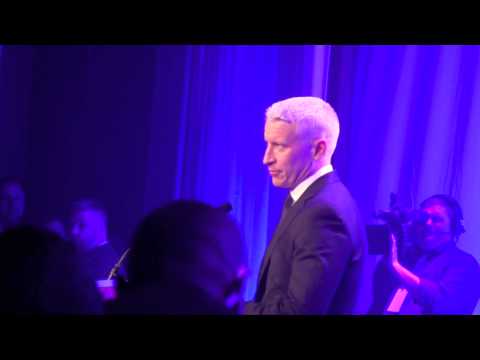