Alain Robert is a French rock climber and urban climber, from Digoin, Saône-et-Loire, Bourgogne, France. Known as “the French Spiderman” (after the comic character Spider-Man), or “the Human Spider”, Alain is famous for scaling skyscrapers using no climbing equipment except for a small bag of chalk and a pair of climbing shoes.

Having climbed 143 of the world’s tallest buildings with his bare hands, Alain has achieved celebrity status in more than 100 countries. He has climbed famous landmarks such as the Eiffel Tower, Petronas Tower, the Empire State Building, and the Montparnasse Tower, as well as the world’s tallest skyscrapers; his ascent of the 828-meter Burj Khalifa tower in Dubai was front page news worldwide, and his ascent of the National Bank of Abu Dhabi attracted over 150,000 spectators.

Alain’s achievements and his incredible life and death experiences enthral audiences wherever he speaks. In 1998, Alain featured in an award-winning 52-minute documentary titled The Wall Crawler by Director/Producer Julie Cohen. In 2008, the Channel 4 series Cutting Edge covered Alain in an episode entitled The Human Spider; in 2010 he was the subject of a CNN “Revealed Show” that went to a world audience of 700 million people.

Alain’s autobiography, “With Bare Hands”, was first published in English in 2008 by Blacksmith Books. It features his development into a famous urban climber from his days as a child and gives a deep insight into his philosophy and how he managed to overcome his disabilities. 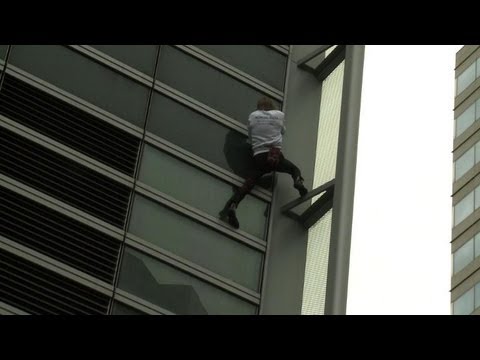