Ed Luce: Time to start thinking about the fiscal cliff

Ed Luce is one of the most highly regarded pundits and speakers on US politics in the world today. His incisive analysis shaped the perspectives of many a reader as they watched the drama of the November 2012 Presidential election unfold.

The same is likely to be true as we head into the festive season with the question of the US fiscal looming large. In his column this week, he offered three reasons why it is likely Congress will fail to reach a lasting deal and will instead choose to kick the can down the road:

1) The immediate stakes are lower than many people think. Even if the US did briefly fall off the cliff, the US economy is still likely to grow by 1-2 per cent next year.

2) The gap between the two parties in Congress has actually grown larger. Democrats are becoming more liberal and Republicans more conservative – only 47% of Democrats are white male (an all time low), in contrast to 90% of Republicans.

3) Paul Ryan, the darling of the GOP anti-tax wing, is seeking to bolster his credentials for a Presidential run in four years. If he supports tax rises it will damage his presidential chances. If he doesn’t support them, any notion of reaching a deal is out of the question.

Ed’s most recent book is “Time To Start Thinking: America and the Spectre of Decline” (2012). According to Liaquat Ahmed, it is “not only a wonderful tapestry of the current state of America, it provides a deeply insightful narrative of the origins of [America’s] current economic and political malaise.”

To find out more about Ed Luce, or to book him as a speaker for your conference or event, please contact Leo von Bülow-Quirk at leo@chartwellspeakers.com or call 0044 (0) 20 7792 8000. 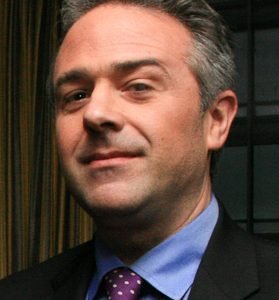